OAKLAND, N.J. – Dec. 18, 2019 – Amerlux, an award-winning design-and-manufacture lighting company, announced today that the show must go on, despite 11th-hour changes and logistical challenges at a stunning concert venue in downtown New York City.

While the first act at the new Pier 17 grew closer, a mid-construction change had the crew scrambling. The project’s architect and lighting team originally designed all-white track lighting to accommodate the floating ceiling at the venue’s Green Room, which offers sweeping views of the iconic Brooklyn Bridge and the Lower Manhattan skyline.

But suddenly the color specification changed to black and hopes for a smooth first-season kickoff turned dark. A well-known comedian was booked and ready to go—but no one was laughing.

“We are all on stage, hoping to be seen in the best light,” said Bill Plageman, who is Amerlux’s VP of Marketing and Product Development. “Through more than 30 years of listening to the marketplace, we continue to keep our promises with state-of-art, innovative solutions, client service that cares and quick shipments to make our clients shine bright in any industry.”

In less than a week, Amerlux responded to the Pier 17 challenge with rapid deployment of 170 all-black SPEQ track heads on 900 feet of all-black global track. As result, the scheduled performances took the stage on time as originally planned.

“New specifications were made because of a late-stage design change, and Amerlux still took care of it in record-breaking time,” said Mark Forman, senior director of strategic procurement at The Howard Hughes Corporation, which rebuilt the four-story, multi-use Pier 17 structure as well as the pier after the devastation of Hurricane Sandy. “There are very few lighting manufacturers that will give you that kind of service. Most manufacturers would not have been as understanding. Timing was critical because we had to get the project completed for our season’s first events—Amy Schumer and Kings of Leon were going to be occupying the space.”

Pete Vrochopoulos, who is a global account executive at Gexpro, was the electrical distributor on the project.

“Amerlux provided the newly requested fixtures and track in five days, which is unheard of,” Vrochopoulos said. “We made the lighting designer understand that Amerlux is a national partner of Howard Hughes and if they had a product that fits the space, we want to use that product and incorporate it into the design.”

As NYC’s new cultural and culinary destination, Pier 17 is home to a dynamic array of waterfront restaurants from world-renowned chefs, ESPN’s live broadcast studios, Nike’s new design center, as well as The Rooftop at Pier 17, which is a 1.5-acre, year-round community space and performance venue.

“We use Amerlux lighting anywhere and whenever we can—from our event spaces and hospitality across the portfolio,” Forman said. “We know we can expect superior quality every time. I appreciate the personal touch that I get from the Amerlux team. I feel they care about us as a company and me as a person. They are flexible and easy to work with and they live up to their commitments.”

Amerlux has helped many venues and destinations shine, while dramatically cutting energy costs and maintenance expenses.

The Queens Museum’s Rubin Gallery, a narrow, black-walled space with 40-foot ceilings was lit with 25 300-watt halogen lamps. These lights struggled to illuminate the gallery adequately and bulbs burned out quickly. As a result, the New York City museum used Amerlux’s new innovative product, which perfectly showcased the works of art. (Read how Amerlux solved the problem.)

A true New York City icon, the venerable Kleinfeld Bridal has been selling some of the finest wedding dresses for more than 75 years. Made famous as the home of TLC’s reality show, “Say Yes to the Dress,” Kleinfeld is a bridal retail legend.

Kleinfeld had one little problem though: When brides-to-be came in for their fittings, they complained the dresses they ordered didn’t look right. The colors were off. With dresses costing between $2,000 and $40,000 each, anything less than perfection is not an option. (Read how Amerlux solved the problem.)

Snowmass Village, a picturesque ski town nestled in the Rocky Mountains near Aspen, Colo., wanted to redevelop its town center with new buildings for a hotel, condos, town hall and an outdoor ice rink. The challenge? Built around a 35,000-square-foot plaza, the town needed a way to illuminate the space while still preserving the area’s iconic night skies.

Construction on the hotel ran over budget and the developer called on Innovative Lighting Consultants (ILC) for help. The Denver-based lighting design firm found a ready answer for the dark skies and budget issues in Amerlux’s Passo LED step light. (Read how Amerlux solved the problem.)

Home to nearly four million people, Los Angeles is a sprawling city renowned for its appealing climate, metropolitan culture and storied position as the seat of the entertainment industry. Steeped in rich history, the city’s unique spirit is derived from its century-old legacy and love of modern architecture. As a result, Los Angeles was steadfast on embracing new technologies and preserving its past when it planned to upgrade the streetlights within its historic downtown section several years ago. (Read how Amerlux solved the problem.)

For more information about the company’s lighting solutions, call Amerlux at 973.850.4342. 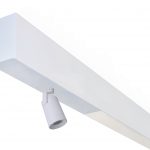