Color Shift: Why It Happens In LEDs and the Simple Way to Avoid It

One of these rainbows is beautiful like a dream and one is an ugly nightmare. (Right photo courtesy of Energy.gov).

Rainbows in nature are beautiful things and seeing them in the sky can be a soul-stirring event. Looking up in a room and seeing a row of lights that should be a uniform shade of white but are instead a rainbow of varying hues is anything but beautiful. It’s definitely not soul-stirring.

Color shift, also known as color maintenance and chromaticity shift, has been a problem in the lighting industry for a long time. It’s long plagued electric lighting and outdated technologies such as metal halide and fluorescent lamps were notorious for color shifting after just a few hundred hours of operation. A row of troffers, each emitting a slightly different color was a common sight.

Quality LEDs are less prone to this nuisance than other lighting technologies. That said, with LEDs’ ultra-long lifespans, color shift can be pronounced towards the end of their operating life. According to the Lighting Research Center at Rensselaer Polytechnic Institute, color stability is the second most important factor for specifiers, behind only its CRI rating.

What causes color shift in LEDs

LEDs are made up of three basic elements: the board (substrate that everything is built on), the die and the phosphor. Most LEDs are blue and are turned various shades of cool or warm white through the magic of the phosphor. The phosphor consists of a layer of particles coating the LED. Common materials in the lighting industry for phosphors include red nitride, aluminate and garnet.

A byproduct of creating light is heat and UV emissions. This is true in nature (a lesson everyone learns by getting sunburned at some point) and its true with artificial lighting. LEDs emit less heat and UV radiation than older lighting technologies, but they do still emit significant amounts of both.

The enemy of the LED’s phosphor is the heat and UV radiation it emits during operation. Over time, these two forces degrade the phosphor and break down its components. The result is a fixture that used to give off nice white light but is now a little off—perhaps a bit blue or pink or green. The light becomes ugly, especially when it doesn’t match the other lights it’s deployed with.

How to avoid color shift

Unlike older lamp styles, color shifting doesn’t have to be an inevitability with LEDs. There is a way to avoid it and preventing color shift is one of the marks of a quality LED product.

At Amerlux, our secret is to leverage superior grade quality materials and operate them well within their range:

“We don’t drive our LEDs to their full capacity,” says Alejandro Guerrero, director of engineering research and development at Amerlux. “Instead, we use the best quality LED possible and we drive it at a fraction of what it is capable of.

“This means the LED runs at very low temperatures, protecting the phosphor elements. Driving an LED like this makes it last a very long time. The light you get from an Amerlux product on day one will last for tens of thousands of hours longer than a lower quality LED pumped to 60 or 70 percent capacity. With a good driver, that lesser LED will last for a while, but won’t look nice,” continues Guerrero.

The consistent color quality of market-leading LED solutions is obvious when you look at an array of LEDs together.

“When you put quality products together, they will have the same shade of color temperature and they will keep that shade for a long time,” says Carlos Alonso-Niemeyer, principal at Reflex Lighting (Amerlux’s manufacturer’s rep in the northeast). “Products without such quality won’t have consistency and some lights will be a little pinkish and others a little green.”

Lighting is a powerful tool for creating spaces that are beautiful, efficient, healthy and productive. For that light to last in the same perfect state after years of use, it all comes down to specifying the best quality LEDs you can for a project’s budget. Rainbows are beautiful when they occur in nature. To avoid them in your designs, schedule your free lighting consultation today 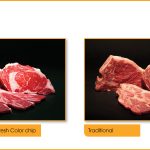 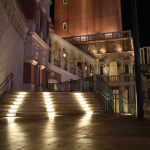 What is the right light? A primer for architectsArchitecture & Design