Amerlux, an award-winning design-and-manufacture lighting company, announced today that it will ship all of its standard products in 10 days or less.

Five years ago, Amerlux launched a QuickShip program that pledged a short turnaround for a small handful of standard products that included recessed linear fixtures, recessed downlights and exterior floodlights.

Since embracing Lean manufacturing virtues in 2014, Amerlux has decided to disband the old program and offer a 10-day pledge for all standard products company-wide. The banner that hangs on the wall in the company’s production facility reads, “It’s not the BIG that eat the SMALL…it’s the FAST that eat the SLOW.”

“Time is money,” said Amerlux CEO and President Chuck Campagna. “We speak the same language as our customers. They plan, spec and maintain facilities and we do everything in our power to make sure that our products are shipped on time. No matter how complex the challenge, we take every opportunity personally until we exceed expectations.”

Thanks to thoughtful planning, employee feedback and continuous improvement, Amerlux has dramatically improved its manufacturing process, which continues to yield benefits for its customers through rapid efficiency. Consider a sample of progress:

A recent internal report revealed that the time it takes Amerlux to produce one downlight has been reduced from 330 seconds to 60 seconds since it has implemented Lean procedures. Since 2016, on-time performance has improved from 40 percent to 95 percent.

A large portion of Amerlux’s portfolio is available for shipment within 10 days, including its new line of exterior lights, which underscore its commitment to value and reliable performance.

Its eligible exterior lighting solutions include: 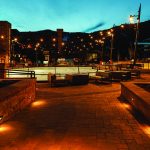