A Year in Review: Amerlux Lights the Way into Building Automation with Delta Electronics at the Helm

Within the building world, a quiet revolution is unfolding. The premise that lighting should be lighting and independent from other building systems is changing.

Amerlux, located in Oakland, N.J., was acquired in 2019 by Delta Electronics, a $9 billion international electronics manufacturer with its roots as a global leader in power electronics and thermal management solutions.

Company executives believe lighting is an integral part of the future of building automation, an industry traditionally focused on HVAC.

A year after the acquisition, EdisonReport sat down with leaders from both Delta and Amerlux to exchange views on the emergence of lighting as a key element in the building automation field.

Joe Oberle, who wears two hats as Delta’s Vice President of Corporate Development and Chairman of Amerlux, reflected on the large number of synergies as the teams have come together to develop a complete total solution with building owners and occupants in mind.

“If you think about where the world is going today, everything is going to be connected,” said Oberle, who also leads Delta’s Building Automation Business Group in the Americas region. “We are excited to foster the next generation of smarter buildings and smarter city solutions.”

“Amerlux will serve as the vehicle for the future of building automation, given lighting’s indispensable role,” Campagna said. “Since lighting already has power and is embedded in ceilings, an IoT-enabled lighting system could in the future provide more services, such as asset tracking or a real-time locating system.”

This year, at AHR Expo – known as the world’s largest HVAC event – Delta’s vision came together with the deployment of their building-related automation which was integrated across the various Delta businesses and made completely operational around the theme of “Smarter Buildings, Smarter Cities.”

“We’re thinking outside the envelope,” Oberle said. “All of these disparate systems are coming together to form automation both inside and outside the building.”

Delta’s AHR booth depicted a modern cityscape, complete with a carpeted mock-asphalt road down the middle with opportunities to “get off” the highway and learn about each of the Delta solutions. Although an HVAC show, Amerlux exhibited their indoor and outdoor architectural fixtures which were controlled by different Delta automation control systems from various parts of the booth.

With LED lighting leading a fully functional and integrated building automation system in the future, architects and designers will be more receptive to such technology, allowing them to “clean up the ceiling” especially as various systems and devices in recent years have begun taking up more space, according to Bill Plageman, Vice President of Marketing and Product Management at Amerlux.

“This opens a new chapter for building intelligence and smart cities,” he said. 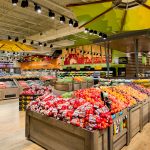